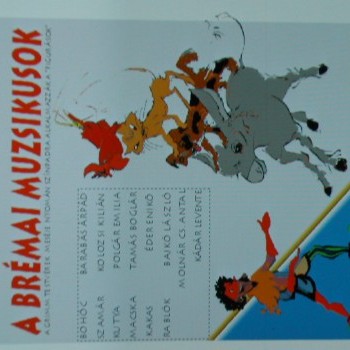 The Musicians of Bremen

“This fable is as if it didn’t really exist” – a colleague of mine said when the rehearsal began. It really does seem so, even more so that this masterpiece does not abound in narrative either. What mattered for us though was that it is about the forming of a community: how do completely different people find themselves and others in this world, in a situation in which nobody wants them. They are useless, but due to some miracle they form a team and find meaning to their little lives. In this way such everyday goals like simply being a musician in Bremen are completely revalued. They find their own and collective Bremen each in this game in which words have no central role. Prankish mischief was the base from which this new troupe created this fable-play that can bring joy to children and adults alike. We hope that the fable is truly not at an end.