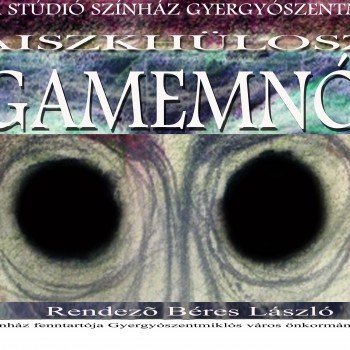 Aeschylus was an Athenian playwright and director of his own plays in the V. century B.C. With minimal outside tools he wrote the most devastating, yet most sophisticated tragedies that cut to the bone even today – we only need to decipher what the 2500 year old play’s characters and themes mean to us today. Agamemnon presents a tiny part of the lives of the Atreides ruling in Argos. The past is horrifying and banal at the same time: a war is raging between a Troy and Argos because of a disloyal Helen. The casualties on both sides are rising, so much so, that king of Argos, Agamemnon, sacrifices his own daughter, Iphigenia, in order to ensure success. As the play starts, the people of Argos are awaiting the news of victory after ten years of war. But what does victory mean in such a war? Can anyone be a victor in a war like this? And what end does the sacrifice ensure: that we need to choose from two values, loosing one on the behalf of the other? When does such a sacrifice gain any meaning? Revenge for revenge, war for war – is it a worthy answer? The production, just like the play itself, does not tip the scale in either direction. It begins with the questions and possibilities of retaliation and forgiveness and it also closes with them. In the meantime we witness a bloody victory and a bloody revenge. Aeschylus, the pragmatic sage does not ask for judgement on our part – but only deliberation.