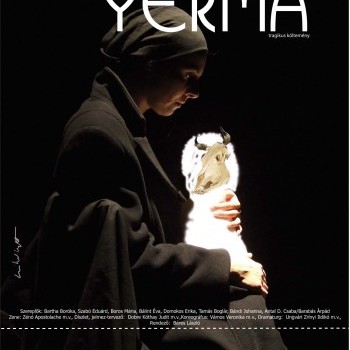 Yerma longs for a child with her husband, but Juan is incapable to fulfill her wish. The husband drowns his desperation into labor and tries to compensate for the missing child with everything imaginable. The well-known masterpiece of Lorca is making forced sterility manifest on the stage. It presents the drama of the infertile woman forever longing for a child who in her search for happiness either forgoes on her self-realization or realizes herself in such means that won’t allow her to look in the mirror again. In the direction of László Béres the structure of the original play is changed, it attempts to mix the elements of movement theater, flamenco, argentine tango and modern dance.