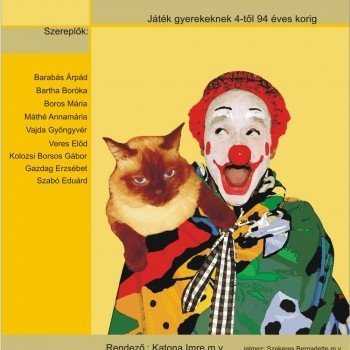 The Great Thief of Colors

The thief of color is a kind of dread like the traditional witch of children’s stories. Only it is evil in a much more adult way. It does not steal people, or children, but only their color, their smile, their music: the essence of their lives and specifically because it loves beauty. The moral thus ranges from the hatred of everyday egotism to violence on the level of society at large, so that at the end the children can sing together: “freedom is a rare jewel”

Swedish children’s poetry is popular all around the world, but a Scandinavian drama is still a rare encounter. The rare value of Tor Age Bringsvaerd’s play is that it at once alienates the audience from the well-known fable elements. As well as the linguistic play and lyricism and that author’s point of view that allows the staging to be based on clown-play and circus magic.

Our fable play’s magically beautiful, lovable soundtrack was composed by Papadimitriu Grigorisz who died tragically young. With this play I wish to give homage to his memory.

Keszeg, beggar, girl in the office

Nyakigláb, beggar, girl in the office