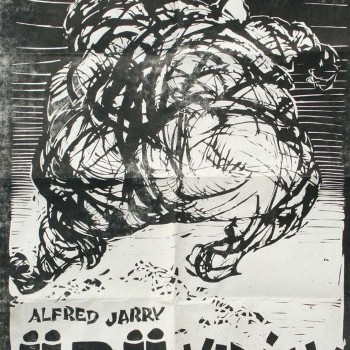 King Ubu landed Figura in the spotlight of theatrical professionals. The difficult preavantgarde text was a mounting challenge for the amateur theatre group. Jarry’s play becomes a spectacle of movement theatre in Figura’s interpretation, in a filthy lung-colored space covered with 400 to 500 dirty burlap sacks opened with five entrances that incorporate the audience as well. “A rat’s nest in which there is a war over space.” The play is “deceiving in its interpretation of a compassionate King Ubu. It is also deceiving in that the character developments are not polarizing in a moral sense and so it irremediably refuses any kind of handrails… Other times I can’t grasp the moral gap, each character simply develops some aspect of ubuness: just enough light is shone on each character, that they are able to conceptualize the being-Ubu in themselves. Not a trace of pathos is to be found here, only the grotesque, the irony, the height of the absurd frigidity… in László Bocsárdi’s movement theatre the foremost theatrical sign is the human body moving in space.

The bear, the phynancial horse