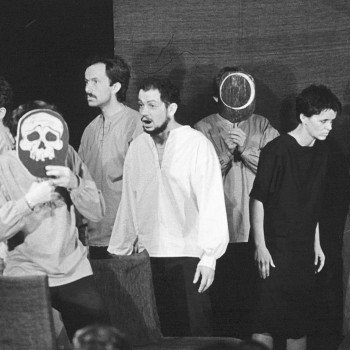 László Bocsárdi’s directing dispels any remaining viewer or actorial illusion about remaining outside… here the actor is the viewer and the viewer the actor. Same place, same place. Both groups are outside language, outside meaning. What needs to happen is the mysterium of transubstantiation... the entire stage production played out, encompassed the myth reduced to its bare essence and if the absolute should ever appear with its blinding light, words become unnecessary… This is the most progressively conservative stage production of this entire last season, where immersion-technique becomes pure style. The nineteen actors deserve a photo essay for the tremendous power of their face display. From the absolute of tragedy not one face can be allowed to be missing.