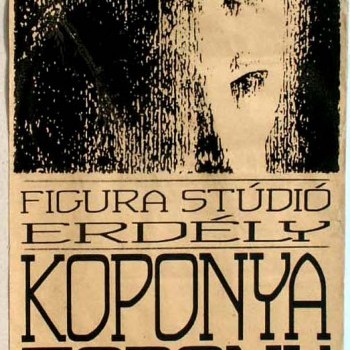 It is the curiosity of the 1991-92 season that the collaboration with director László Lantos from Novi Sad is continuing. It is a paradoxical period since he leads a tough and sometimes maybe even useless actor training seminar which’s results are not always and undoubtedly positive. The results of the drawn out improvisational rehearsal series is Pöszmékör and Skulltower. One of the defining traits of the production is its precision and the calculated concept that Lantos set up even before starting the rehearsal process. Due to the staggering amount of recorded sound the length of the play is tremendous. It is a variation according to Lantos on Beckett’s Endgame by the title of Skulltower. The insanely consuming production divides opinion regarding the guest performances from Marosvásárhely… “They beat the drums… the percussionists at front stage and the tam-tam kept at it for four hours without pause as if we were witnesses to a primitive tribe’s marching music accompanied by the movement of rhythms or the rhythm of movement… below the percussionists two figures clad in black and adorned with skulls moved incessantly while two figures in trash cans showed up as well all the while the beckettian libretto gurgled, whined, agonized all around..

Maybe it was a very good production, maybe our parochial thinking isn’t able rise to the elevations where the end of the world remained to be the spirit and body of a handful of decomposing people giving off foul odors, Krónikás admits he didn’t understand one single thing of it all the while complementing the relentlessness of the percussionists. Maybe we should have seen something big, but it’s just that most of the audience went home during the play and those who remained were in no mood to applaud.”