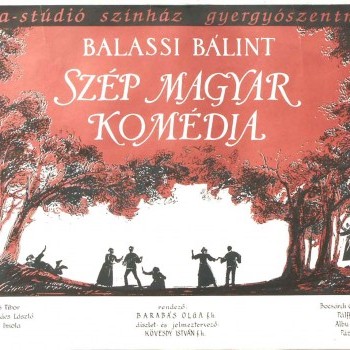 Balassi recounts the love story of Tirsis and Angelica hiding under the names of Credulus and Julia based on an Italian shepherd’s drama by Castelatti entitled Amarill in five acts. The Italian form is heavily reworked into a Hungarian specificity because although the poet presents the sorrows, amorous lust, spiritual sophistication of Julia and Credulus in prose, Balassi also transcribes various poetic fragments into his own work. The brilliant juxtaposition of the Bocaccio-style love renders the play at once a profound comedy and also a sophisticated, humane and complete the amorous lyre. The Beautiful Hungarian Comedy first and foremost aims to be a play. It wants to be such a play that only theatre can produce, at which’s heart there lurks some sort of profound somberness: the ever elusive secrets of the quest for identity and human relations. At the same time the play is also a sort of statement: three directorial colleagues: László Bocsárdi, the director, István Kövesdi, the designer and Olga Barabás, the director: their statement about how they want to see theatre and what role theatre holds for them and the audience.

“…our problems are mutual, we ceaselessly long for beauty, goodness, peace, love? And so we drift towards one another in our singular lonely vulnerability which always and forever leads into the same conclusion: I am because you are and I am as you see believe and feel me to be. And so when we come to this realization we again remain alone and what are we to do with our pain, doubt, our entire selves? The Beautiful Hungarian Comedy speaks of this singular adventure and nothing else, at which’s heart is the game, a small space that is again and again ripped away from reality and begins to live a life of it’s own.”