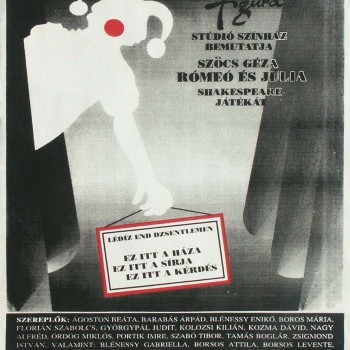 Filled to the brim: in other words: complete: this triple, three-fold hermetic Shakespeare play: Romeo and Juliet of Géza Szőcs, of László-Károly Vadas and last but not least of Figura. Three visions in one single scope with the due respect and eternal gratefulness to the great scope-builders (Szőcs Shakespeare as well as Shakespeare Szőcs). On the poster too it should be lettered like the name of the immortal Jean-Paul Sartre: with a hyphen. Furthermore:

3 Romeo and Juliets, all in one and one by one, one by one (1-1-1) and all in one (3), complete holy trinity, synthetic analytics, induction-deduction, conclusion, therefore beginning, here is the completion of human existence, Struggle, Love, being, the entirety of Mars, Venus, the whole of Szőcs, the complete Vadas, the full Figura and the entire world: which is of course theatre. All in this mega-simulator, in this actor’s make-believe-room, this World seemingly so bright, in this it evolves (starting from its head) from Eve this hero of passions so hot, the Ur-Hero, us, all of us, the mythical us-them-they, so many.

Of course the Ancients wouldn’t be Heroes without having to struggle against certain worrisome Barriers that stopped them dead in their tracks on numerous occasions for a few seconds on their world conquering journey.

But the hero always defeats the horrid beasts and saddling the magical dragon doesn’t stop until he reaches the Picturesque Castle of the Imagination. Once there all of the masks fall into their rightful place? That which is above, will now be below, that which was first will now be the last, beggar from kings, kings from beggars. This is the scenario of every optimistic apocalypse because even the positive Last Judgment has an invisible, but inferred, i.e.: readable script.

According to valid sources just delivered to us this whole scribbling that was submitted under the name of Sex-speare, this wole Romeo-Hamlet-Othello-Ophelia fairy tale, wasn’t even written by Shakespeare, but by… Géza Szőcs, or rather… Thomas More. Or: let’s get everything out under the sun: More himself was Szőcs, so he is to blame for the entirety of theatre… According to some Szőcs is none other than comte de Saint-Germain, the Immortal… Other believe that this Immortal is Vadas who on the turn of the millennium chose Gyergyószentmiklós as his residence.

I myself believe that as of now Figura is the most professional non-profession troupe of this wide Transylvania, that Károly László Vadas is the most promising living-classic of theatre direction and that Géza Szőcs is the most-living classic ever.