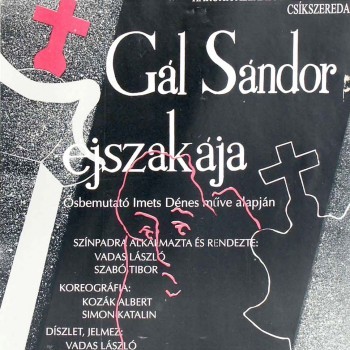 The Night of Sándor Gál

Sándor Gál is today no doubt a legend. A personality of almost mythic proportions of first the Hungarian, and after its suppression, of the Italian rebellions. From the lieutenant of the emperor’s forces through the colonel of the independence movement all up to the general rank, his life, legend, the mythical mask first and foremost hides the Man: one who takes responsibility for his actions and all their consequences.

The protagonist of Dénes Imets’ play is exactly this forever-Sándor Gál. The emotional and personal Man: with his own weaknesses, fallibilities, vulnerabilities. The tragedy of Sándor Gál is first and foremost human fate: the decision-maker at mercy of his own decisions, the tragedy of the man left wandering alone in the “night”. He undertook with a clear conscience what was necessary to be undertaken: there isn’t anything more one can do. But this undertaking comes with a heavy price and Sándor Gál payed it to the last penny.