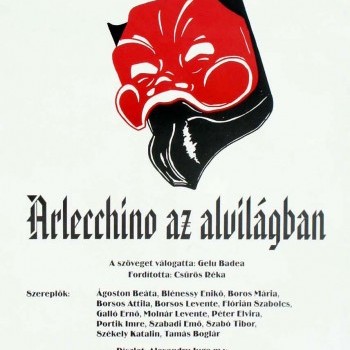 Arlecchino in the Underworld

If a director has to work with such a young cast as that of Figura and the director himself is a university student, then hardly a better choice could have been made than this commedia dell’arte.

The momentous and well crafted play presents the nippy playfulness of medieval scribes and took the audience back from where the Decameron set out on its journey. This production isn’t about anything else, but life itself: money, love, purity and indecency, shown in a playful or solemn light. The resounding notes of Carmina Burana in the last act aim to remind us of this very fact.

Gelu Badea did not aim for stylistic deconstruction. He sets the play in traditional frames backed by Alexandru Iuga’s functional, creative scenic design. A lot of novelty, youthful ideas, brave comedic spirit fills the scene and the director made the actors believe that they can handle the play. (Their excellence was so resourceful that anyone who knows the company can only speak of it in superlatives. First and foremost I am thinking of Elvira Péter who plays Falmina, who only appears on the scene a handful of times and still managed to be one of the most memorable characters in the entire production.)

From midnight to dawn when according to hearsay ghosts and spirits claim the night Gelu Badea raises some figures from ages long gone by. With less speech, but all the more play and prankish comedy makes them tell their tales that everything is in vain. (…)